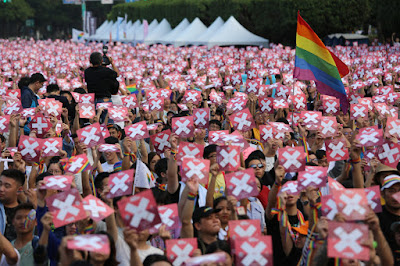 Importantly, national referendum will poll residents on marriage equality this week. Taiwan will decide whether to change its civil code to equalize marriage as between ‘people’ rather than ‘man and woman’. The referendum will also ask whether to dismantle parts of Taiwan’s LGBT education policy.

Besides, stars of Taiwan’s movie industry expressed support for marriage equality in the country at the Golden Horse Awards.

The award ceremony in Taipei, often dubbed the Chinese-language Oscars, came a week before Taiwan heads to the polls to vote on equal marriage.

In an iconic display of support for LGBT rights, the judges delegation walked down the red carpet flying a giant rainbow flag. A number of stars wore rainbow pins and others referenced the upcoming vote in their speeches.

Taiwan’s path to becoming the first country in Asia to legalize same-sex marriage is uncertain. Now, it looks like Thailand could beat Taiwan, because Thai military government is holding public consultations on same-sex unions, and it may pass legislation before the end of the year. 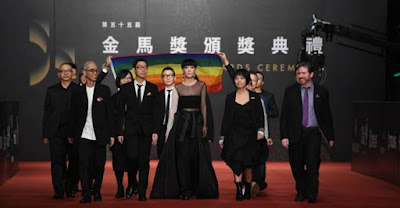