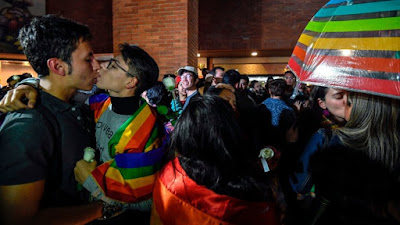 LGBT Colombians hold a 'besatón', or kiss-a-thon, to protest discrimination at a shopping mall in Bogota.

Dozens of couples kissed at the same time in the midst of a supportive crowd, in protest of an incident that happened at the mall a couple days earlier.

Esteban Carrillo and Nicolas Tellez were the victims of this act of discrimination they were also present in the protest.

The two gay men, who say they were merely hugging and holding hands, were harassed by another customer who claimed they were fondling each other in front of children.

The men called police to protect themselves from harassment, but the cops fined them for indecent exposure instead.

And so the protestors gathered, wielding rainbow flags and chanting in favor of gay rights. And, of course, kissing.

“Kissing someone is no crime,” Esteban said. “All we want is for there to be less divisions in this society, and no discrimination against people over their sexual preferences.”

Colombia has more protections for its LGBT citizens than many South American countries, but the stigma in the public eye is still very real. 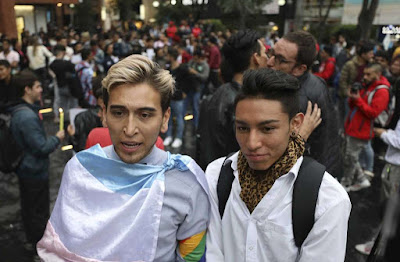 Esteban and Nicolas, the young couple harassed and fined for being gay