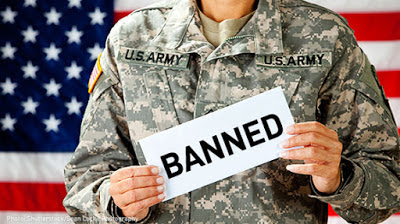 Three years after the Obama Administration told transgender individuals they could serve openly and have access to gender-affirming medical and psychological care, the Trump Administration has reversed course.

On July 26, 2017, Trump announced his plans to reinstate a ban on transgender individuals from serving in any capacity in the U.S. military, at the White House. On April 12, the Pentagon began to implement a controversial new policy that critics say is essentially a “don’t ask, don’t tell” policy for trans service members.

Under the new policy, currently serving transgender individuals who have already received a diagnosis of gender dysphoria may continue to serve in their preferred gender, receive hormone treatments and undergo gender-affirming surgery. But after April 12, anyone with gender dysphoria who is taking hormones or has already undergone a gender transition will not be allowed to enlist. Further, any currently serving troops diagnosed with gender dysphoria after this date will have to serve in their sex as assigned at birth and will be barred from taking hormones or getting gender-affirming surgery.

While Trump’s policy restricting transgender military service started, there are still four lawsuits pending against the policy, and all four cases are proceeding. 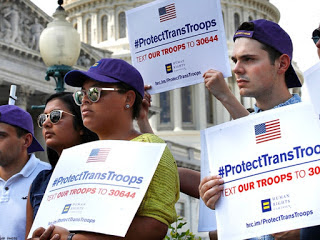