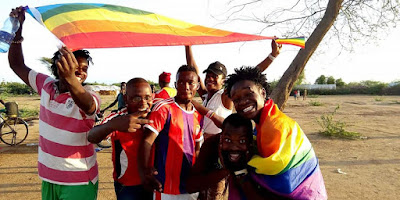 Organizers of the first Pride parade in a refugee camp will defiantly return despite violence after the inaugural event. Mbazira Moses and his organization, Refugee Flag Kenya, put together the 2018 Pride at the Kakuma Refugee Camp in Kenya.

Kakuma is one of the world’s biggest refugee camps and has a sizeable population that identifies as LGBT. Many of the LGBT people come from Uganda where gay sex is illegal.

Last year’s Pride festival went off with a hitch and proved a great success. But organizers then received death threats and violence afterwards. "If you don’t leave the camp we are going to kill you one by one and we mean it", a note to LGBT people in the camp read.

But Refugee Flag Kenya is not intimidated and plans to make the 2019 Pride event bigger than last year. Mbazira decided to engage local LGBT groups and businesses in nearby Nairobi.

‘This time our plan is to involve the Kenyan community and activists in our pride event so that it creates strong solidarity, togetherness and awareness as an LGBT community,’ Mbazira said.

Along with a Pride parade, the Kakuma Pride will host a trans party as the marquee event. The trans party will happen at a gay club in Nairobi. During the party a Mr and Miss Pride will be crowned and will also feature a beauty pageant.

The second Kakuma Pride will run on 27 June with organizers crowdfunding to cover the costs of running the event.