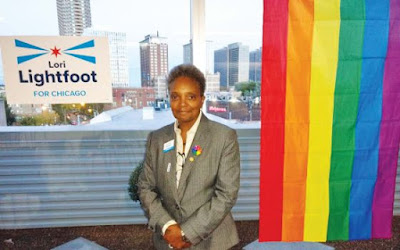 Chicago just became the largest United States city to elect a black woman and openly gay person as mayor in a history-making vote.

Lori Lightfoot, a lawyer and the former president of the Chicago police board, defeated Cook County Board President Toni Preckwinkle on Tuesday to become the next mayor of the Windy City. She will succeed Rahm Emanuel, Chicago’s two-term mayor and former chief of staff to President Barack Obama.

Lightfoot, 56, has held appointed positions related to police oversight and accountability in Chicago under Mayor Emanuel and former Mayor Richard Daley. She also previously served as assistant US attorney and, most recently, as a senior equity partner at Mayer Brown LLP.

During the race, Lightfoot outpaced Preckwinkle with endorsements and gained the backing of the media, the business community, and candidates who did not make it to the runoff. Meanwhile, the Chicago Teachers Union endorsed Preckwinkle. So did Chance the Rapper and Rep. Bobby Rush (D-IL), among others.

Lightfoot’s primary proposals include increasing access to affordable housing, creating an office of public safety to reduce crime and reform policing, and pushing through a real estate transfer tax to help combat homelessness. She also backs abolishing US Immigration and Customs Enforcement.

That Lightfoot is a gay black woman leading the third-largest city in America is of huge significance, and she is aware of it. “I hope my presence in this race serves as an important reminder of the progress we’ve made in equality and inclusion,” Lightfoot told in February.

The challenges ahead aside, Lightfoot’s victory is a historic moment to celebrate.