A gay Democratic candidate should concern Trump the most 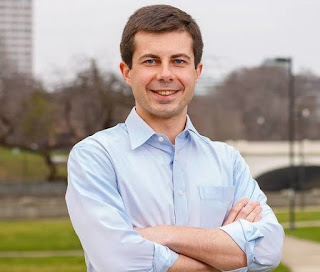 Pete Buttigieg, the mayor of South Bend (Indiana), has become an unlikely rising star in the 2020 Democratic presidential field.

In just a matter of a month, this 37-year-old - who would be the youngest and the first openly gay US president, has transformed himself from long-shot to legitimate contender for the White House.

Speaking to an audience gathered to see him in Manchester, New Hampshire, he admits that his campaign has had a "really good few weeks". And he added: "I'm mindful that this is a marathon but we're certainly thrilled with the way our message has been resonating."

A month ago, the mayor was a political afterthought in a Democratic field that seems to be expanding by the day. That was before a well-received nationally televised town hall appearance that caught the attention of political commentators and a public that was, perhaps, in search of a fresh face.

Seth Mandel of the Washington Examiner said he is "calm, sane, and funny in a sea of performative-anger posers, and we should be able to appreciate that regardless of politics".

Andrew Sullivan of New York Magazine said he might be the best possible Democratic matchup against Donald Trump. "In style, generation, demeanour, and background, Buttigieg is a near-perfect way to put a drop shadow behind all of Trump's grandiosity, age, temperament, and privilege," he wrote.

Recently, a new public opinion survey in the state that holds the first primary in the race for the White House indicates that onetime longshot Pete Buttigieg is now in third place among the multitude of contenders for the Democratic presidential nomination.