The One You Never Forget 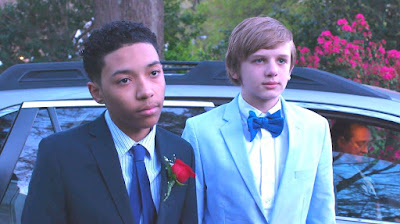 Writer and director Morgan Jon Fox explores the uncertainty of first formal dances in a queer love story that’s also about unconditional love and acceptance in his heartwarming short film The One You Never Forget.

The eight-minute film stars London Curtis as Carey, a teen prepping for his first big school dance. While Carey readies himself for his date, his parents (Charles Malik Whitfield and Tasha Smith) reminisce about their first dance and how it paved the way for their relationship.

But when Carey’s date arrives, he’s secretive about who it is, refusing to bring his date inside for a picture. Owen D. Stone plays Hunter, the young man who arrives at Carey’s house to take him to the dance.

The film has won numerous awards for Best Short at festivals including the Sidewalk Film Festival, Seattle Queer Film Festival, Reeling Chicago, Out on Film Atlanta, and several others.

Watch the short film here, and watch the trailer below: