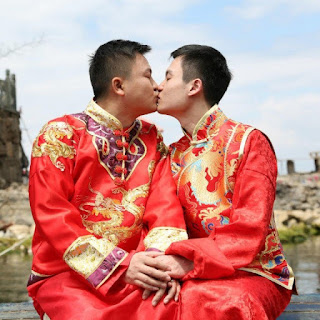 China has taken a small step towards recognising same-sex marriage, and activists in the country are tentatively optimistic. A body of the county’s highest level of state power, the National People’s Congress, has publicly acknowledged petitions to legalise marriage equality.

Yue Zhongming, spokesman for the commission for legislative affairs of the National People’s Congress standing committee, acknowledged for the first time petitions from the public to legalise same-sex marriage at a press conference.

He said that the commission had received more than 250,000 online suggestions and letters supporting marriage equality being written into the country’s civil marriage and family code. The fact this topic is now publicly and officially on the table gives the LGBT community hope for the first time after years of hiding and struggling.

Peng Yanzi, director of LGBT Rights Advocacy China, told: “We were very happy, pleasantly surprised by the news. As the country becomes stronger economically, its civilisation must also keep up. The important thing is that it’s no longer possible for society to stay where it was 10 years ago.” Peng added that the acceptance of same-sex marriage among young Chinese people has “exceeded” the imagination of lawmakers.

Homosexuality was decriminalised in China in 1997 but the subject is still taboo in many areas. A recently poll with more than eight million respondents so far shows that 63 percent of people in China support legalising same-sex marriage.