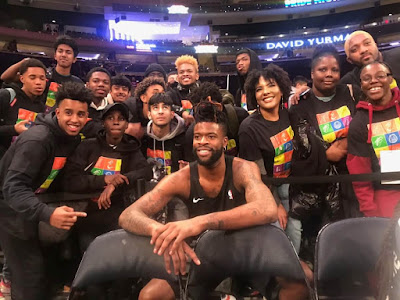 The New York Knicks did host their third annual Pride night on January 16 when the team took on the Phoenix Suns at Madison Square Garden.

The festivities did get underway before the game when the MSG ceiling and exterior was lit up in Rainbow colors and the New York City Gay Men’s Choir Ensemble performed the National Anthem.

The night was a family-friendly hit for all who attend. There will be a halftime game between Junior Knicks teams from the Hetrick-Martin Institute,, and Pride-related in-game entertainment and giveaways are also planned. Guest DJ Valissa Yoe is also going to be on hand.

At halftime, a team from the Hetrick-Martin Insititute,  a nationwide organization serving LGBT youth, played in a basketball game on the court and elicited loud cheers from the MSG faithful. The team, dubbed Soldiers of Diversity as part of a sports program at Hetrick-Martin, consists of youth of different sexual orientations, gender identities, races, and backgrounds.