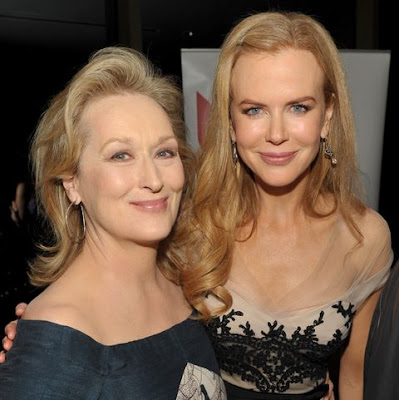 The new adaptation of the Broadway musical, directed by legendary queer creator Ryan Murphy, revolves around a group of out-of-work actors who decide to come to the aid of a lesbian high-school student who is denied the chance to bring a female date to her prom.

Dee Dee Allen (Meryl Streep) and Barry Glickman (James Corden) are New York City stage stars with a crisis on their hands: their expensive new Broadway show is a major flop that has suddenly flatlined their careers.

Meanwhile, in small-town Indiana, high school student Emma Nolan (Jo Ellen Pellman) is experiencing a very different kind of heartbreak: despite the support of the high school principal (Keegan-Michael Key), the head of the PTA (Kerry Washington) has banned her from attending the prom with her girlfriend, Alyssa (Ariana DeBose).

The actors hit the road with Angie (Academy Award winner Nicole Kidman) and Trent (Andrew Rannells), and travel to the small Midwestern town of Edgewater, Indiana, after seeing a news report about Emma’s experience and attempt to win her the chance to bring her girlfriend to the prom.

In the trailer, Dee Dee Allen (Meryl Streep) announces: “We have come to this community on behalf of a young girl,” referring to student Emma Nolan (Jo Ellen Pellman). Watch it below: