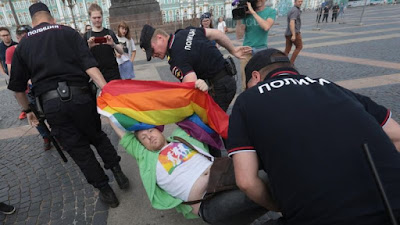 On June 6, 2013, several activists gathered outside Russia’s State Duma to peacefully protest the reading of a bill banning the “promotion of non-traditional sexual relations among minors”.

They were harassed by an opposing group of conservative Orthodox Christian activists carrying religious icons, who pelted them with eggs while chanting: “Russia is not Sodom.” Riot police surrounded the LGBT+ protestors, pushed them into buses, and arrested, convicted and fined them for so-called “administrative offences”.

In a recent ruling, the European Court of Human Rights (ECHR) concluded that the measures taken against the protestors “did not correspond to a pressing social need and were thus not necessary in a democratic society”.

The top human rights court rejected the Russian government’s claims that the police’s behaviour wasn’t motivated by sexuality, ruling that the activists’ arrests, transfer and ensuing sanctions constituted an interference with their right to freedom of peaceful assembly.

It also found violations of the right to liberty and security, and the right to a fair trial in relation to all of the applicants. Their arrests outside the State Duma were deemed to be arbitrary, and the administrative proceedings, taken as a whole, did not allow them a fair hearing.

The court ordered Russia to pay each of the applicant’s damages of €5,000.

Unfortunately this is only the fourth time in three years that the ECHR has found Russia to have violated LGBT+ people’s rights. The country lost a 2018 case over a ban on Pride events, while a 2017 decision found that the country’s “gay propaganda” law violates human rights standards. And just a few months ago the court issued fines for violating freedom of association by blocking the registration of LGBT+ groups.

The human rights court has little power to take enforcement action over continued breaches, but the victories are still celebrated by human rights groups for the precedent they set. 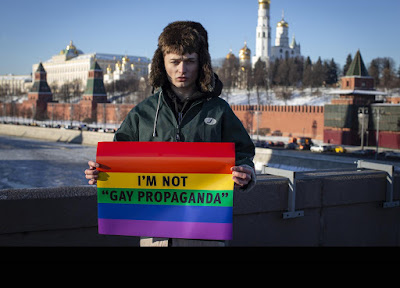