Students in skirts protest against sexist dress code in Canada 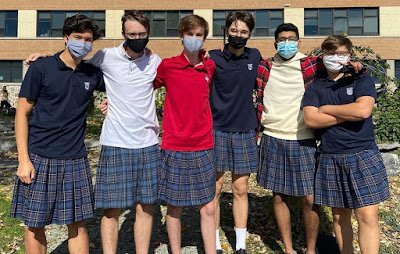 Over a hundred students at Collège Nouvelles Frontières in Canada wore skirts to school to protest a sexist dress code. Students joined similar protests that are sweeping through Quebec to highlight the arbitrary requirements imposed on girls, but not boys, and the inherent anti-LGBT rationalization behind it.

When Zachary Paulin told classmates he intended to wear a skirt, he urged them to do so as well and he thought about 30 students would join him. Instead, over 100 classmates came to school showing their legs. “I knew that it was going to be a big movement, but not that big of a movement,” he said. “I was pleasantly surprised.”

“Today, you probably saw that some boys, including me, wore skirts,” Paulin posted with on Instagram with some snapshots of the day. “Well, let me talk a bit about why we did that. Basically, a boy wearing a skirt is a sign of resilience, solidarity, and support in the intersectional battle for equality between the sexes.”

“The double standard on the way society views our women and men is blatant; if a woman decides to wear a suit or pants, clothes associated with masculinity, it’s not a big deal. But the moment a man does anything remotely feminine – whether it is to put nail polish, makeup, or, in our case, a skirt – fingers are pointed and he gets insulted. People will say that he’s not a ‘real man’ and they will automatically assume his sexual orientation.”

“So, by wearing a skirt, we are united and together against the sexualization of women and we’re sending a message against toxic masculinity which keeps boys from being who they truly are, without judgment,” he continued. “We’re in 2020, we should be open-minded and fight to end discrimination, homophobia, and sexism. That’s what our skirts represent.” 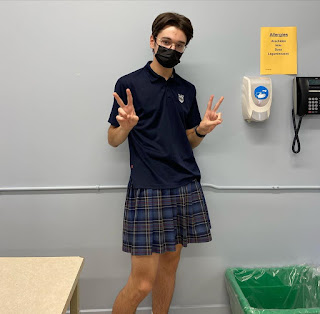 Zachary Paulin has led the protest