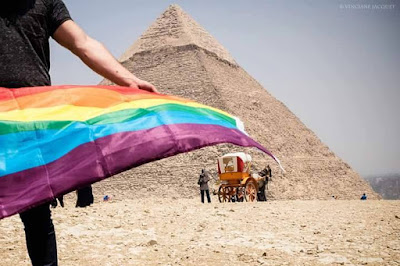 “Egyptian authorities seem to be competing for the worst record on rights violations against LGBT people in the region, while the international silence is appalling,” Rasha Younes, a researcher at Human Rights Watch, stated in the report. "Egypt has unabashedly continued to target and abuse LGBT people simply for who they are.”

For its report, they interviewed LGBT people who had been prosecuted between 2017 and 2020 under “debauchery” and “prostitution” laws, as well as two defense attorneys. Their accounts allege systemic abuse throughout the judicial system in Egypt, whether explicitly or just in practice.

While LGBT people have long been subjected to homophobia and transphobia in Egypt, Younes said the situation worsened after its current president, Abdel-Fattah el-Sissi, took power in 2014.

Younes said Egyptian authorities actively monitor social media and city streets to crackdown on LGBT people and others who are protesting or organizing for civil rights, all of which are labeled as subversion or even terrorism.

Human Rights Watch said police will set up fake profiles masquerading as gay men on dating apps like Grindr and social media platforms such as Facebook and WhatsApp in an attempt to meet in public or learn the names and meeting places of other queer people for future raids and arrests. Officers will also look through arrested people's phones with the same goal in mind.

Egyptian government has long used anti-LGBT arrests to whip up support among Islamic conservatives while distracting citizens from poor living conditions and other civil rights abuses.