'The Aussie Boys' you need to watch 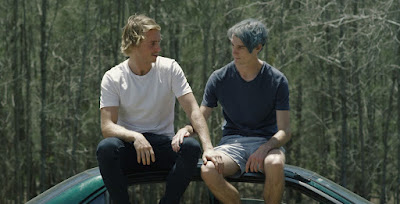 Come and take a trip 'Down Under' and witness seven stories about the lives and loves of these men and boys from across Australia. From historical beginnings in the 1700's all the way through to noughties truck stop dilemmas, present day road trip romancing and faces from the past returning for a final goodbye.

‘The Aussie Boys’ is a strong and engaging collection of shorts that really does highlight the film-making talent in Australia. Each of these shorts is so different, that it makes the collection compelling to watch.

Cédric Desenfants’ ‘Burning Soul’ opens the collection and it takes the viewer back to June 1727 with two young men held hostage after their ship is wrecked. Despite the two being close friends and having grown up together, it takes this situation for their true feelings to be revealed.

‘Miles’ by Christopher Sampson follows and it takes us back to the present day as three friends find themselves in a love triangle.

The standout on this collection is ‘What Grown Ups Know’ by Jonathan Wald. The short tells the story of the relationship between a gay teenage boy and his ailing mother.

Simon Croker’s ‘All Good Things’ captures a young relationship on the verge of ending, with one half of the couple blindsided.

The final short is ‘The Dam’ by Brendon McDonall, which sees two men meet after many years apart to finally confront the feelings they had for one another.