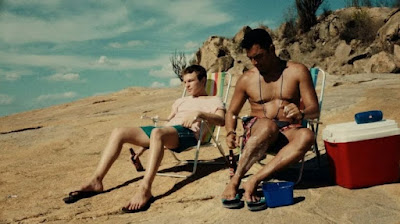 The Brazilian romance film “Private Desert” is a gritty and powerful queer drama. Director/cowriter Aly Muritiba develops the story slowly, first following Daniel (Antonio Saboia), a restless policeman who is in trouble for assaulting a recruit during training.

Daniel’s only joy in life is his long-distance relationship with Sara, whom he has never met. When Sara starts ghosting Daniel after he sends her a nude photo of himself, Daniel drives across the country to find her.

Sara is first seen around the film’s midpoint, and she is revealed to be Robson (Pedro Fasanaro, who is non-binary and starring in their feature film debut), a fact that the lovestruck Daniel discovers as he finally gets to act on his desires with “Sara.” How the couple negotiates their relationship, and the impact it has on both their lives, is what makes “Private Desert” so affecting.

This Brazilian drama is a welcome and assured intervention into that country's calcified ideals about desire and masculinity.