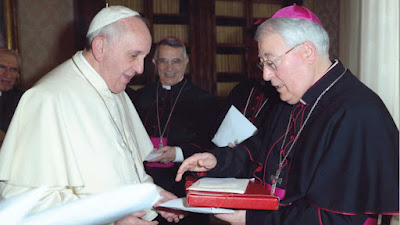 Pope Francis has deposed Reig Pla, the ultra-conservative bishop of Alcala in Spain, months after submitting his resignation letter, and he will retire today.

In his place, Jesús Vidal will act as apostolic administrator, but will not cease to be auxiliary bishop of Madrid. At 48, he is the youngest bishop in Spain.

Reig Pla was associated with initiatives against homosexuality and supporting conversion therapies. He had presided over masses in Dictator Franco’s name, and he was awarded by the far-right organization HazteOír in 2012 for “defending human dignity”.

In a mass broadcast on public television, Reig Pla declared that homosexuals deserve to go to hell and their sexual condition makes them more likely to prostitution or become pederasts.

The deposes of Reig and the appointment of Vidal signifies the Pope's support to Madrid's cardinal Osoro, close to him, who puts one of his faithful in a demarcation dependent on his authority, and sends a clear message to the most conservative sector of the Spanish episcopate.

Recently, Pope Francis has inducted new cardinals from around the world, most of whom are young enough to have a say in any potential vote for the next pope. The selections hailed from Asia, Europe, Africa and the Americas. The new cardinals include men known for their progressive views and their pastoral work.

Something is changing in Catholic Church?