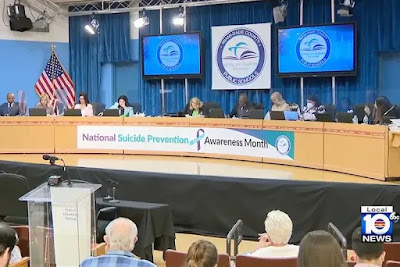 The Miami-Dade County Public Schools board has voted against a proposal to observe October as LGBTQ History Month, following the state's recently enacted Parental Rights in Education law that prohibiting teachers giving lessons on "sexual orientation" or "gender identity."

The law, which critics and others frequently refer to as the "Don't Say Gay bill", was signed into law in March by Republican Gov. Ron DeSantis.

After hours of public debate, the board voted 8 to 1 to reject the declaration, which was meant to “remind all cultures within our wider community of the important roles that LGBTQ people have taken in shaping the social, historical, legal, and political worlds we live in today. The only vote in support of the proposal came from sponsor Lucia Baez-Geller.

“Last year, the board had the courage to support this item, despite all of the attacks,” Baez-Geller said. “There's a reason why this item continues to be under attack, as this year of course is an election year. And unfortunately the anti-LGBTQ agenda has become a very dominant political wedge used by certain people.”

Board member Christi Fraga opposed the proposal saying that the board is going to follow the law. "The Parental Rights law is very clear that this type of imposition should not be imposed on our children, especially in our elementary schools," she said.

Outside the building, members of the Proud Boys gathered, wearing hats, shirts and bandanas emblazoned with the organization's insignia.

This meeting is the first since the last elections, during which a majority of the school board candidates who were endorsed by DeSantis won their races, running on pledges to support his education agenda.

DeSantis has shown his willingness to remove elected officials from office, for allegations of mismanagement, in the case of four former Broward County School Board members, or for what DeSantis sees as a failure to enforce state laws in the case of the former Hillsborough County Attorney. 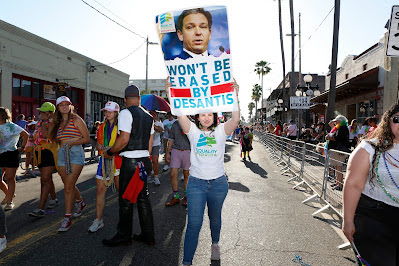 It's time to change, Florida!!!