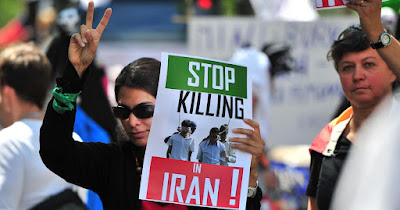 They were convicted of "spreading corruption on earth", a charge frequently imposed on defendants deemed to have broken the country's sharia laws. The two women were accused of promoting homosexuality and the Christian religion.

They were informed of the sentence while in detention in the women's wing of the Urmia jail. In a short statement, the Iranian judiciary confirmed that the sentences had been issued.

Activists denounce Iran's treatment of LGBTQ individuals. Homosexuality is banned in Iran with its penal code explicitly criminalizing same-sex sexual behavior for both men and women. Activists also accuse Iran of being in the throes of a major crackdown that is affecting all areas of society.

Last June, ten men were executed, including a gay man. Iran is one of a dozen Muslim-majority countries and regions that enforce Sharia law and impose the death penalty for homosexuality.