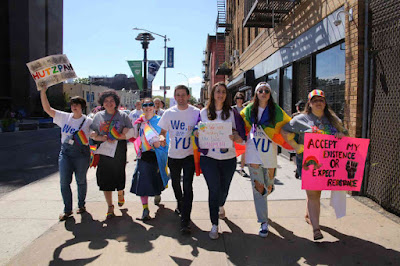 The case arises out of a dispute between Yeshiva University, an Orthodox Jewish university in New York City, and a campus Pride Alliance group that wishes to be recognized as an official student organization by the university.

The justices, in a 5-4 decision, declined to put on hold a state court ruling that a city anti-discrimination law required Yeshiva University to recognize YU Pride Alliance as a student club while the school pursues an appeal in a lower court.

The five-justice majority acknowledged that the case could end up back before the justices after the university jumps through procedural hoops. The majority’s brief order went out of its way to note that the university may return to the Supreme Court if it does not obtain a quick ruling in its favor from New York’s appellate courts.

While the Supreme Court’s decision is technically a loss for the university, because it leaves the trial court’s order in place, the decision reads like an implicit threat to New York’s appeals courts. It is very likely that, if New York’s appeals courts do not step in to permit Yeshiva University to deny recognition to the pride group, the Supreme Court will do so in the near future.

Orthodox Judaism is a minority and theologically conservative branch of Judaism and follows a fundamental interpretation of biblical texts. The other branches of Judaism in the United States, including the Conservative, Reform, Reconstructionist movements, account for over 80% of all American Jews, and support same-sex marriage and ordination of LGBTQ clergy.

In addition, Israel is considered the most progressive country in the Mideast regarding LGBTQ rights, they recognize same-sex unions though they still don’t legally allow same-sex marriage. In any case, Israel stands in sharp contrast to the rest of the region and becomes an exception on acceptance of LGBTQ rights.