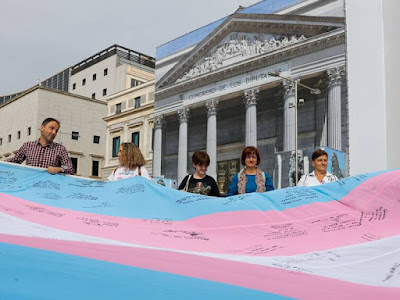 Scotland and Spain have both advanced legislation making it easier for transgender people to legally change their gender despite strong opposition movements in both countries.

Both bills require further steps before they become law. Scotland, as part of the United Kingdom, needs royal assent for its bill, while Spain’s legislation has been passed by one house of its Parliament but needs the approval of the other, something that is expected.

Scotland’s Parliament voted 86-39 to ease the process of obtaining what’s called a gender recognition certificate. It will lower the age for application from 18 to 16 and will require applicants “to have lived in their acquired gender for three months rather than two years”. Also, applicants will no longer need to have a diagnosis of gender dysphoria.

Under Spain’s bill, anyone 16 or older will be able to change the gender on their legal identification documents by simply declaring their gender. Previously, they had to have been diagnosed with gender dysphoria by several doctors, and in some cases, they also needed proof they had been living for two years as the gender they identified with or even records showing they had taken hormones.

A new step for trans rights!