Russia could ban any public demonstration of homosexuality 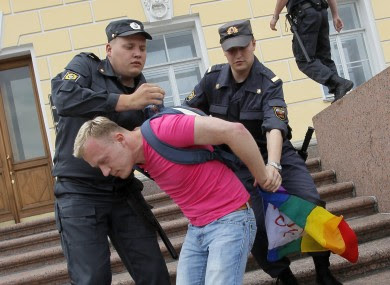 Some Russian lawmakers have drafted a bill that would criminalise any "demonstration of one’s distorted sexual preferences in public places".

The new law would make any public display of "non-traditional sexual relations" and it would build on top of Russia’s 2013 anti-gay propaganda law, which bans the "promotion" of homosexuality anywhere children can see.

Nikitchuk added in a statement that homosexuality "is a huge threat to every normal person, which can affect children or grandchildren, and thus interrupt the race".

Great Mr. Putin, which will be the next step in Russia, to build a ghetto for isolating gay people?