What would you do if your child was gay? 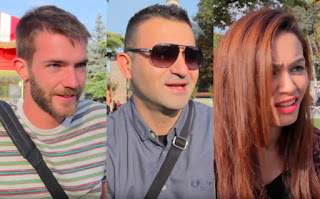 In a recent video, people seemed mostly unfazed by the prospect no matter what country they are from when they were asked: "What would you do if your child was gay?"

An Australian woman said thoughtfully: "You can’t do anything about it because it is not a decision he made. He was born with this kind of orientation so the only thing you can do is accept and support him".

An elderly couple from Ireland were downright enthusiastic: "I’d like to understand how he feels because it’s still your child,’ said the husband as his wife nodded in agreement. ‘I would wish that he could find happiness whether he’s gay or straight. We’ve passed a law now that gay people can marry in our country. I’m very proud of that… So gay people in our country have equal rights".

A Norwegian woman simply said: "I would support him or her. Tell them that I love them anyway, that it doesn’t matter to me".

But clearly it would be difficult for others. "I would be very upset personally,’ said a woman from Azerbaijan. "I would try to consult the doctor to see why he’s gay. "If it is hormones then it is from God. If it’s society, then I would try to help him", she added.

A Turkish woman said: "I would think about it but later I would accept it. I would feel bad at the first time because you think everyone is the same but this stuff happens in the world".

An Iranian man admitted: "I would probably be sad. I want my boy to have a wife and my girl to have a man. But maybe I would accept it in the end. You cannot get rid of your children. But I will not be happy".

The worst a woman from the United Arab Emirates made clear that a gay child in unacceptable to her. "I will kill him", she said. Asked why, a man with her but off camera said: "It’s against the natural law".