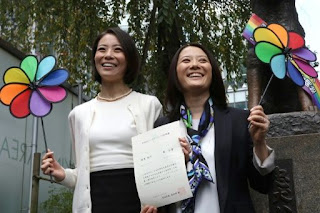 A Japanese gay couple have become the first to receive a partnership certificate.

Hiroko Masuhara, 37, and Koyuki Higashi, 30, were the first to receive the certificate saying they are in a loving relationship based on trust. They received the certificate in Shibuya, a district of Tokyo which became the first locale in Japan to recognize gay couples.

While this does not give them any legal benefits on par with marriage, officials say it is designed to support same-sex couples who say they are routinely discriminated against when looking for accommodation or visiting partners in hospital.

The couple, who previously made headlines after marrying at Disney, have been together for years and long to get married in Japan.

"I want many people to know that same-sex couples are around you", Higashi said. "As a first step, I hope this will spread across Japan", she added. 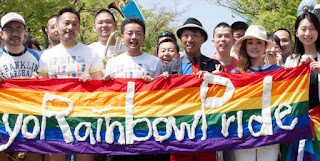 Things have to change in Japan