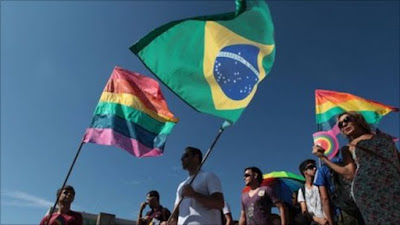 Read this post in glaad.org the day before that the Olympic Games begin:

"As the 2016 Summer Olympics begin in Rio this week, GLAAD is calling on media outlets to include the many issues facing the LGBT community in Brazil while reporting on the events.

LGBT people in Brazil say this is a very difficult time, with the rise of anti-LGBT evangelical politicians who’ve blocked LGBT inclusive projects. Advocates express concern over the looming impeachment of president Dilma Rousseff and the rise of Michel Temer whom advocates say is far more anti-LGBT than Rousseff. They say this is the most anti-LGBT moment they’ve experienced. “And that includes during the dictatorship,” according to one.

In 2014 alone there were 326 murders of LGBT people in Brazil, with about 40 percent of these victims being transgender women, compared to them making up only 10 percent of the community. Brazil also is the country with the highest number of reported violence against transgender people.

Just a few days ago, a gay man was found murdered and tortured in Rio and his death is, sadly, one of many. A recent story in the Advocate highlights the huge problem of anti-LGBT violence.

In addition, the LGBT to community in Brazil is faced with police brutality, religious fundamentalism and greater likelihood of living in poverty. Christian evangelism is growing in both Brazilian politics and society. More conservative evangelists are being elected into congress and have since been barring many laws granting LGBT protections from being passed.

Because many LGBT people aren't given equal access to education, job opportunities and housing, the poverty rate is much higher for the LGBT community.

GLAAD can provide reporters with background information, Brazilian LGBT contacts, and organizations who are working to make life better for LGBT people in Brazil. We hope that, in addition to the games, the Olympics will be an opportunity to shine a spotlight on the issues faced by the Brazilian LGBT community."