Iran hangs an adolescent for being gay 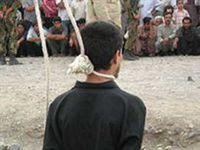 Iran's regime executed a gay adolescent, Amnesty International reported, the first confirmed execution of someone convicted as a juvenile in the Islamic Republic in 2016.

Consensual homosexual conduct remains illegal under Iran’s Sharia law and is punished with public flogging or even execution. While the Islamic State throws gays from rooftops, the Islamic Republic of Iran hangs them.

"He had no access to a lawyer and the judiciary rushed through the investigation and prosecution, convicting and sentencing him to death within two months of his arrest as though they could not execute him quickly enough”, Mughrabi added.

With this execution, Iranian authorities have demonstrated once again their callous disregard for human rights.


At the same time, the execution of 20-year-old Iranian youth Alireza Tajiki, which had been scheduled for 3 August, has been postponed again following renewed public pressure. Despite this, Alireza Tajiki, who was 15 years old when arrested, remains at risk of execution as the authorities have yet to quash his death sentence and grant him a fair retrial.