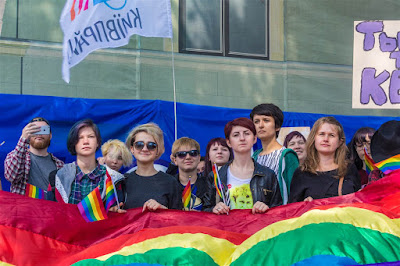 Ukraine held its first Pride March outside Kiev at the weekend, and it went without any major incidents.

On Saturday, over 100 marchers came together in Odessa, the country’s third-largest city, and marched through the streets of the city.

Authorities were initially resistant to allow the march, but they only banned the group from taking their event to Shevchenko Park.

Marching along the Primorsky Boulevard, with a rainbow banner stretched between them, the parade was protected by 700 officers of the national police. At the end, the event went ahead peacefully, without major disturbances or attack.

In the last years, Kiev Pride Marches were cancelled because authorities said they would not guarantee protection to those taking part from homophobic violence.

Activist Bogdan Globa wrote about the problematic situation of LGBT people in Ukraine.