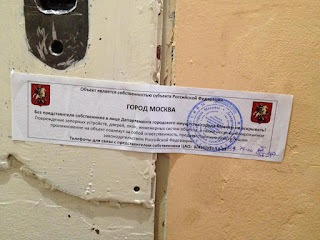 Staff at Amnesty International’s Moscow Office arrived at work yesterday to find their office unexpectedly sealed with a notice from municipal authorities warning people not to enter. The locks and alarm system had been removed and the electricity supply appeared to have been cut off.

“We do not know what prompted Moscow authorities to prevent our staff from accessing our offices – an unwelcome surprise for which we received no prior warning," said John Dalhuisen, Amnesty International’s Europe and Central Asia Director.

The short notice posted on the organization’s central Moscow office – which is rented directly from the city’s municipal authorities – said the building was “property of a city of the Russian Federation” and that nobody could enter without being accompanied by a municipal official.

Human rights organizations in Russia have complained of official pressure in recent years, including the intimidation of their staff and controversial legislation regulating the operation of non-governmental organizations.

This is the Russian Federation's overview by Amnesty International:

Freedoms of expression and peaceful assembly remained severely restricted. The authorities dominated the print and broadcast media, and further extended their control over the internet. NGOs faced further harassment and reprisals under the “foreign agents” law, while their access to foreign funding was further restricted by a new law banning “undesirable” organizations. Growing numbers of individuals were arrested and criminally charged for criticizing state policy and publicly displaying or possessing materials deemed extremist or otherwise unlawful under vague national security legislation. Four people faced prosecution under the 2014 law that made repeated violations of the law on public assemblies a criminal offence. Deep flaws in the judicial system were further exposed through several high-profile cases; a new law gave the Constitutional Court the authority to overrule decisions by the European Court of Human Rights. Refugees faced numerous obstacles in accessing international protection. Serious human rights violations continued in the North Caucasus, and human rights defenders reporting from the region faced harassment.