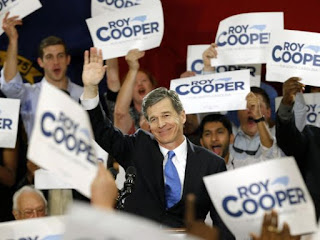 While Donald Trump will be the next U.S. president, there appears to be one big win for Democrats in North Carolina.

"By electing Roy Cooper their next governor, North Carolinians have sent a powerful message across their state and this country that the days of anti-LGBTQ politicians targeting our community for political gain are over," the Human Rights Campaign and Equality North Carolina said.

Cooper has committed to repealing House Bill 2, the transphobic bathroom law which banned transgender people from accessing bathrooms and locker rooms in state facilities that correspond with their gender identity. It also eliminated all existing LGBTI-inclusive nondiscrimination ordinances in North Carolina, and banned cities from adopting new protections.