Holy couple at The Real O'Neals 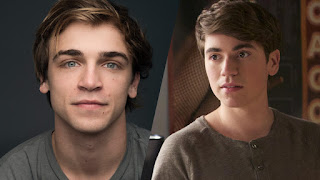 If you haven't been watching ABC's The Real O'Neals, you're missing out.

The series, which revolves around Kenny, a gay teen (Noah Galvin) navigating coming out while living under his very Catholic mother’s roof (the unparalleled Martha Plimpton) while also trying to survive Catholic school

In the latest episode, Kenny's mother, playing church choir director, decides to replace his son with a new soloist. His replacement is the hunky new kid at school, Brent (played by Sean Grandillo).

Kenny sets out to sabotage the new guy's success, until he learns the only reason Brent joined the choir was to meet him. Later in the episode, the guys improvise a rap solo meets classic choral piece in the Christmas choir competition, making for one of the all-time best mash-ups of Oh Holy Night.

If that wasn’t enough, prior to their performance, Kenny confronted his possible love interest Brett, demanding to know why he didn't like him. Before Kenny could get another word out, Brett kissed him right there in the church.