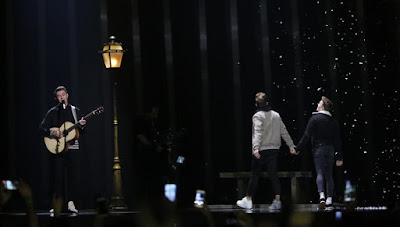 The grand final of the Eurovision Song Contest will not be shown in China after two performances were censored in a local broadcast.

The European Broadcasting Union (EBU), which organizes Eurovision and licenses broadcasts around the world, terminated its contract with the Chinese channel Mango TV after Ireland’s performance was cut, and other sections were blurred to obscure details, when the first semifinal aired on Wednesday.

In a statement, the EBU said that Mango TV’s actions were not in line with the EBU’s values of universality and inclusivity and our proud tradition of celebrating diversity through music.

The singer Ryan O’Shaughnessy, representing Ireland, sang a sentimental breakup ballad Together, which featured two male performers dancing and holding hands. This section of the competition did not feature in the broadcast in China.

O’Shaughnessy declared: “I would like to welcome the decision by the EBU to do that because from the very start we have just said love is love. It doesn’t matter whether it’s between two guys and two girls or a guy and a girl."

“I think it’s a really important decision by the EBU, they haven’t taken it lightly, and I think it’s a move in the right direction. I’m happy about it,” he added.

This marks the first time Ireland have made it to the finals since 2013. Good luck!

Watch the performance below: