May 17 is International Day Against Homophobia & Transphobia #IDAHOT 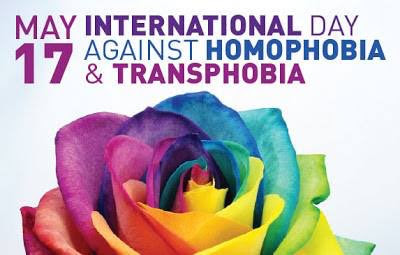 Today, May 17, is International Day Against Homophobia and Transphobia, and European authorities has released the following statement:

LGBT people continue to suffer from widespread discrimination, hate speech and hate crimes in the European Union. Although 71% of EU citizens agree that LGBT people should have the same rights as heterosexual people, according to a study by the European Fundamental Rights Agency (2013), 47% of LGBT people report to be discriminated or harassed in the year preceding the survey. Half of all respondents avoid certain places, public buildings, squares or public transportation, for fear of being harassed, threatened or attacked on account of their sexual orientation or gender identity.

The European Commission is standing against discrimination, prejudice and hate, and for diversity. By raising awareness on the rights of LGBT people, we’re showing the world that no matter whom we love or who we are, everyone should enjoy the same rights. But the Commission cannot combat discrimination alone. An important action therefore is that it supports civil society organisations through the Rights, Equality and Citizenship programme to advance LGBT equality.

On the International Day against Homophobia and Transphobia 2018, by disseminating promotional materials, and projecting the Rainbow flag on the headquarter building, the European Commission states its commitment to stand against discrimination and to promote LGBT equality and inclusion.

Equality and inclusion for everybody everywhere!