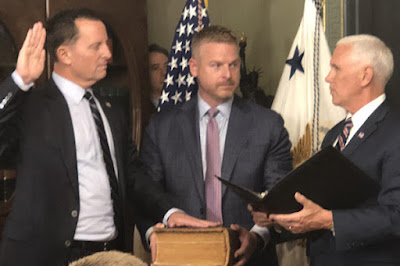 The swearing in of U.S. Ambassador to Germany Richard Grenell, the highest-ranking openly gay official in the Trump administration, by Vice President Mike Pence, who has a long anti-LGBT record, was a sight to behold.

As is customary for the vice president, Pence officiated the ceremony and administered the Oath of Office in the Eisenhower Executive Office Building. Grenell took the Oath of Office on his family Bible, which was held by his partner of more than 15 years, Matt Lashey.

In his remarks, Pence referenced Lashey and echoed Donald Trump’s comment last week that Grenell is an “outstanding man” who will do well as U.S. envoy to the world’s fourth largest national economy.

Looking to the tasks ahead, Pence said Grenell would help strengthen U.S.-German relations by balancing the trade relationship, strengthening military cooperation and encouraging NATO allies to pay their fair share on defense. 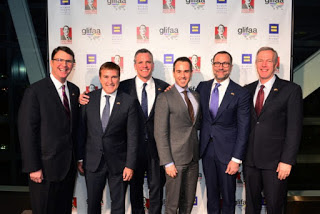 Under the Obama Administration there were
six publicly gay U.S. ambassadors