Black trans people honoured in a street mural in Chicago 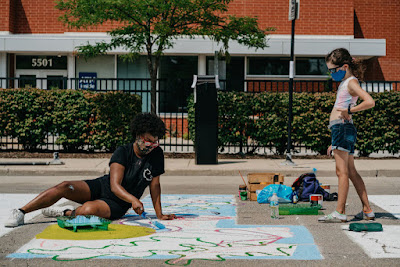 The words ‘Black Trans Lives Matter’ stretch across the street in Catalpa Avenue, in Andersonville. It was created by 22 artists or art groups, with the help of neighbours who donated $4,000 to pay the artists for their time and materials.

Each participating artist decorated an individual letter in the mural. One artist, Bailey Funk, painted the words “say their names” in the letter B, prompting the chamber to consider giving more prominence to the names of the dead.

Now the names encircle the mural, each one colour-coded to give context to the deaths. The names in pink are people whom police killed in the last five years, while the names in yellow identify unarmed people of colour killed by police since 1975.

Among those honoured in portraits are Merci Mack, a Black trans woman killed by a gunshot to the head; Tony McDade, a Black trans man shot by police, and Marsha P Johnson, a Black queer rights activist instrumental in the Stonewall uprising of 1969. 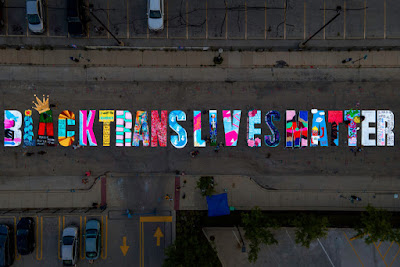