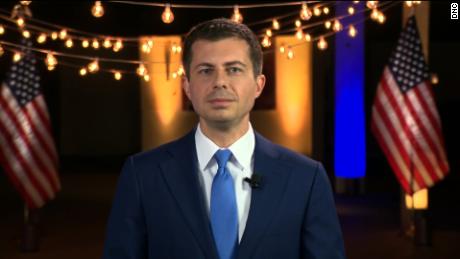 The fourth and final night of the 2020 Democratic National Convention has struck an LGBT inclusive note, with appearances from out politicians including Pete Buttigieg, Tammy Baldwin, Danica Roem, and Robert Garcia.

Buttigieg, the former mayor of South Bend, Indiana, who ran for the Democratic presidential nomination this year, appeared to express support for the ticket of Joe Biden and Kamala Harris and to laud the advances on LGBT rights over the past decade.

Buttigieg, who served in the military, said: “Just over 10 years ago, I joined a military where firing me because of who I am wasn’t just possible, it was policy. Now in 2020, it is unlawful in America to fire anyone because of who they are or who they love. The very ring on my finger reflects how this country can change. Love makes my marriage real, but political courage made it possible, including that of Joe Biden, who stepped out ahead of even this party when he said that marriage equality should be the law of the land.”

“The day I was born, close to where I’m standing, here in South Bend, the idea of an ‘out’ candidate seeking any federal office at all was laughable. Yet earlier this year I campaigned for the presidency, often with my husband at my side, winning delegates to this very convention. Now I proudly support Joe Biden and Kamala Harris," he added.

“If so much can change between 2010 and 2020, imagine what 2030 could look like," he said towards the end. "Imagine what we could achieve, the coalition we are building this very season, gathering progressives and moderates, independents and even former Republicans, to help build a future where everyone belongs."