Joe Biden made history by selecting Sen. Kamala Harris (D-California) as the first woman of color as a vice presidential candidate on a major party ticket, and a rising political star who has demonstrated a commitment to the LGBT community.

Harris is a relative newcomer to Washington, but her record on LGBT rights extends back to her tenure as a District Attorney for San Francisco and California Attorney General as well as her work during her first term as U.S. Senator.

Harris has a strong record of support for LGBT causes. In 2010, one of her signature issues in her campaign for attorney general was her opposition to Proposition 8, the voter-approved ballot initiative that revoked marriage equality in California in 2008.

As Attorney General of California, Harris denied gender affirmation surgery to transgender inmates. She went on to lead efforts to abolish gay and trans panic defenses in criminal trials. Harris also showed her support for LGBT rights as San Francisco District Attorney; in 2004, when Mayor Gavin Newsom declared same-sex marriage legal in the city, Harris conducted marriages for same-sex couples. She also established a hate-crimes unit in the District Attorney’s office as well.

As a member of the U.S. Senate, she co-sponsored the Equality Act. In July 2018, Harris led her colleagues in introducing the Gay and Trans Panic Defense Prohibition Act of 2018, a nationwide bill that would curtail the effectiveness of the so-called gay and trans panic defenses, an issue she pioneered during her tenure as District Attorney of San Francisco.

In October 2019, Harris participated in a CNN/Human Rights Campaign town hall on the topic of LGBT rights, where she pledged her support for "all of the folks who are fighting for equality" in cases that would determine whether gay and transgender people were protected under laws banning federal workplace discrimination.

On campaign, she has spoken out against and promises to reverse Trump’s ban on transgender people serving in the military. And she has promised to appoint an Attorney General who will prioritize investigating and prosecuting anti-LGBT bias crimes and invest money in ensuring local police departments receive proper training on how to interact with members of the LGBT community.
Kamala Harris, the next Vice President of the United States! #YesWeKam 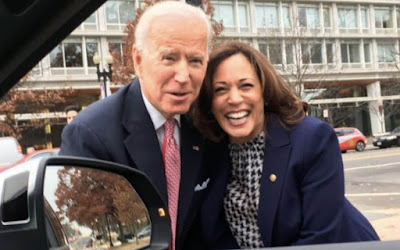