Is Euphoria the most shocking teen TV series ever? 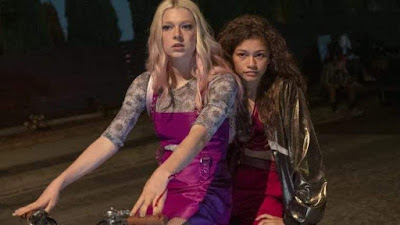 Euphoria is an American teen drama television series created by Sam Levinson, loosely based on the Israeli miniseries of the same name. Euphoria follows a group of high school students through their experiences of sex, drugs, friendships, love, identity and trauma.

Rue (Zendaya) is the character who leads the series. We meet Rue fresh out of rehab after an overdose. With Rue back home at the end of summer, she is free to meet the series’ second lead character, her future best friend Jules (Hunter Schafer), new girl in town and transgender, Just like her character, Schafer is also a transgender woman.

Through Rue and Jules, and standout characters like Nate (Jacob Elordi) and Kat (Barbie Ferreira), viewers can traverse the teen TV tropes of old. There are parties. There are drugs. There is so much sex, and a parade of full-frontal penises to prove it.

Euphoria received positive reviews from critics, who praised its cinematography, story, score, performances, specifically those of Zendaya and Hunter Schafer, and approach to its mature subject matter, although it did become the subject of controversy due to its use of nudity and sexual content.

The series has had high ratings and large audience, and it won numerous awards and nominations. The series premiered on HBO on June 16, 2019, and it was renewed for a second season.