Steelers: a documentary about the world's first gay rugby club 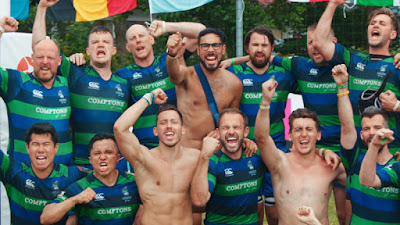 Steelers (2020), directed by Eammon Ashton-Atkinson, is a feature-length documentary about London’s first gay rugby club which started in London in 1995. Following the club’s journey at the world’s biggest international gay rugby tournament, the Bingham Cup, the film explores the how a community joined together by their sexuality is transforming lives.

The Steelers journey to compete in the World Cup of gay rugby in this hopeful yet emotionally honest sports documentary about playing for pride, whoever your team is. More than 60 clubs have formed around the world since, coming together to play for the Bingham Cup every two years.

Ashton-Atkinson, an Australian TV reporter, shot the film in three weeks, allowing his journalistic nous to open up an inside view of the Steelers. The Cup forms the backdrop as we meet one of the newer players on the team, battling depression on and off the field; a key forward who dabbles in drag; and the female coach who still has to battle sexism while participating in a competition that fosters equality and inclusivity.

Ultimately, the rugby club has become a place to belong, where you can be whatever you want. As the players find their self-confidence on the pitch, the playing field being a great equaliser, you can’t help but root for them and celebrate gay sporting lives.

Steelers' World Premiere has been at New Zealand International Film Festival 2020. The movie will make its U.S. Virtual Premiere at OUTShine Film Festival in Florida from August 20-30.