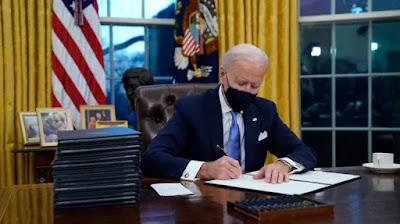 On day one of his presidency, Joe Biden has signed the order enforcing the Supreme Court’s decision on LGBT workplace equality.

It was one of 17 orders signed by the incoming president including declarations re-joining the Paris climate agreement, overturning the ban on travel from a handful of Muslim-majority countries, and strengthening the Deferred Action for Childhood Arrivals (DACA) program.

This order will direct agencies to take all lawful steps to make sure that federal anti-discrimination statutes that cover sex discrimination prohibit discrimination on the basis of sexual orientation and gender identity, protecting the rights of LGBT persons.

The executive order is a clear statement on the part of the Biden administration, that there is no place for discrimination in the federal government. President Biden has committed to overturning every Trump administration rule that limits transgender rights, including tossing out its near-total ban on transgender troops serving in the military.