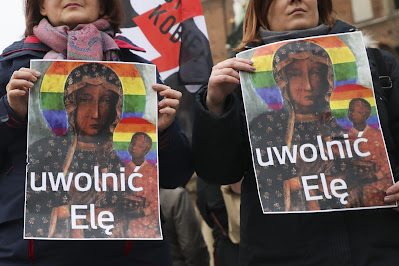 Unfounded charges of “offending religious beliefs” are being brought against three women LGBT rights defenders in Poland for simply exercising their right to freedom of expression.

Three LGBT rights activists, Elżbieta, Anna and Joanna, are facing trial for ‘offending religious beliefs’ in relation to the use of posters depicting the Virgin Mary with a rainbow halo symbolic of the LGBT flag around her head and shoulders. They now face up to two years in prison if found guilty for their peaceful activism.

The authorities are alleging that the three activists pasted the posters in public places such as on portable toilets, dustbins, transformers, road signs, building walls in public areas in the city of Plock, and have ‘publicly insulted an object of religious worship in the form of this image which offended the religious feelings of others’.

The Prosecutor General should drop the charges and the Polish authorities should amend their legislation and bring it in line with international human rights standards and abstain from using it against activists to unduly curtail their right to freedom of expression.

Same-sex relationships are not recognized there and LGBT people are frequently used as scapegoats by politicians in the deeply-conservative nation, which takes many cues from nearby Russia.

Besides, one-third of the nation's municipalities passed resolutions in the past years outlawing "LGBT propaganda". Activists have called these areas, which add up to a land mass larger than the nation of Hungary, as LGBT-free zones.