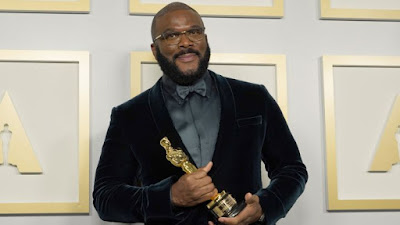 Tyler Perry picked up the Jean Hersholt Humanitarian Award, a special achievement honour that recognises notable philanthropy, at the 2021 Oscars Academy Awards. The filmmaker paid for senior citizens’ groceries, supported the families of Black folk killed by police and founded a film studio that included an LGBT homeless shelter.

During his rousing and heartfelt acceptance speech at the 93rd Academy Awards, Perry sought to soothe a rattled world by calling on people to no longer hate one another, especially those long cast to the margins.

“My mother taught me to refuse hate,” he began, “she taught me to refuse blanket judgment. And in this time, and with all of the internet and social media and algorithms and everything that wants us to think a certain way, the 24-hour news cycle, it is my hope that all of us will teach our kids just refuse hate."

“Don’t hate anybody," he ended.