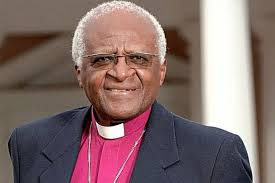 Desmond Tutu, a leader of the nonviolent anti-apartheid movement in South Africa and a vocal LGBTQ rights supporter, died Sunday, December 26 in Cape Town. He was 90.

Archbishop Desmond Tutu was an Anglican bishop and a leader of the anti-Apartheid movement in South Africa. Born in 1931, he followed in his father's footsteps, becoming a high school teacher. He then switched paths to become an Anglican priest. Tutu was on the frontline fighting for freedom and equality in South Africa, where racially segregated apartheid began in 1948.

Tutu won the Nobel Peace Prize in 1984 for his work against anti-Black apartheid laws that segregated South Africa based on race and maintained a decades-long system of oppression against Black South Africans. The Anglican reverend compared anti-LGBTQ laws and persecution to the apartheid laws he worked had to dismantle in his home country.

In 1994, South Africa elected its first black president Nelson Mandela. Tutu said voting in that democratic election was "like falling in love." The two were counterparts in the struggle for freedom.

After Mandela's election, the Archbishop chaired the Truth and Reconciliation Commission, investigating crimes of the apartheid era. He delivered the final report to Mandela in 1998.

Tutu advocated for racial justice and LGBTQ rights globally. In 2013, speaking at the launch of the United Nations’ Free and Equal Campaign, he said, “I would not worship a God who is homophobic and that is how deeply I feel about this. I would refuse to go to a homophobic heaven. No, I would say sorry, I mean I would much rather go to the other place. I am as passionate about this campaign as I ever was about apartheid.” 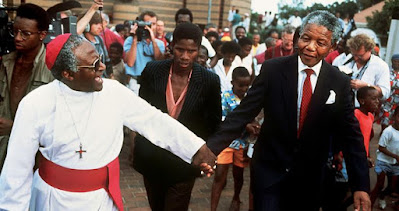 Tutu and Mandela made the world a better place, thanks!!!