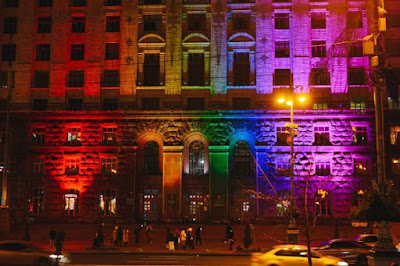 The main building of the Kyiv City State Administration was illuminated with LGBTQ pride colors on the evening of Human Rights Day, the day when the United Nations General Assembly adopted and proclaimed the Universal Declaration of Human Rights in 1948.

Initiated by two non-profit organizations, Amnesty International and KyivPride, the effort aimed to draw public attention to the pressing issue of homophobic and transphobic crimes in Ukraine.

The city administration’s move is unprecedented for Ukraine. Most Ukrainian officials are reluctant to publicly support LGBTQ rights, as it might cost them voters in a largely conservative society.

“Today’s action draws attention to the equal rights of every person without exception. I am convinced that the recognition of equality by each of us leads people to freedom, mutual respect and peace,” Mykola Povoroznyk, first deputy head of the Kyiv administration, said.

Attacks on LGBTQ people and community-related events such as the annual Pride march are widespread in Ukraine. Far-right groups are often behind them.

The head of Amnesty International Ukraine, Oksana Pokalchuk, pointed out that neither the existing legal framework nor law enforcement agencies can currently provide adequate protection to LGBTQ people in Ukraine. But, last month, Ukraine handed out its first ever jail sentence for a homophobic hate crime. 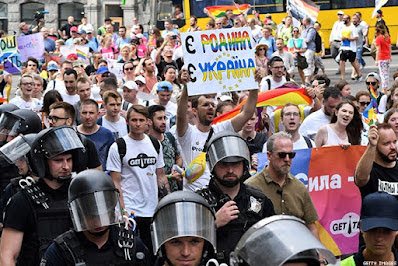