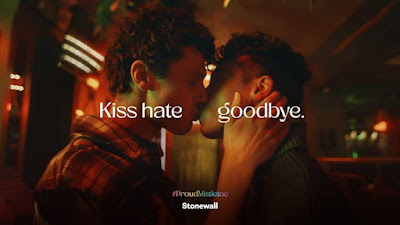 This Christmas, Stonewall have launched a campaign encouraging the LGBTQ community to “kiss goodbye to hate” underneath a rainbow mistletoe.

The ‘Proud Mistletoe’ campaign has launched after the UK Government’s own National LGBTQ Survey found that 40% of respondents experienced a negative incident in the 12 months before the survey, rising to an astonishing 54% for trans people. Since then, reports of hate crime have increased even further.

In the spot, the soundtrack of news reports detailing shocking and homophobic attacks against the LGBTQ community are undercut by music and scenes of happy couples kissing under a rainbow mistletoe.

Stonewall says it wants to help create a world where people can show affections, regardless of gender or sexual orientation, and aims to continue on the legacy of historical LGBTQ trailblazers, who used kiss-ins as a form of protest in the 1970s and 80s.

The community can get involved digitally, either at home or while out and about, by kissing under the new Stonewall #proudmistletoe Instagram filter. Any donations made to support Stonewall’s vital work will also be automatically entered into a prize draw to win a Proud Mistletoe.

Watch the spot below: