Only hours before the capital city’s annual Pride parade, a 42-year-old Norwegian citizen from Iran opened fire at three locations in Oslo’s nightlife district. Two people were killed and at least 10 seriously wounded in an incident being investigated as an act of terrorism. The suspect is believed to be a radicalised Islamist.

While the motive was unclear, Oslo Pride cancelled a parade scheduled for 12pm as one of the shootings took place outside the London Pub, one of the city’s largest LGBTQ venues.

With Oslo Pride cancelled, countless Pride flags and flower bouquets were left outside the London Pub for a makeshift memorial. Thousands gathered in the afternoon to silently march along Rosenkrantz towards the London Pub that soon became a joyous celebration of community spirit.

Finally, Norwegians of all conditions, not only queer, have remained defiant in the face of a mass shooting in front of an LGBTQ venue in Oslo by staging a “spontaneous” Pride walk.

We all are stand with you!!! 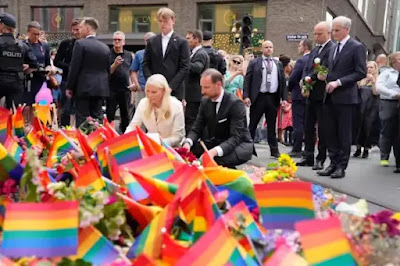