U.S. Supreme Court overturns abortion rights landmark, what will be next? 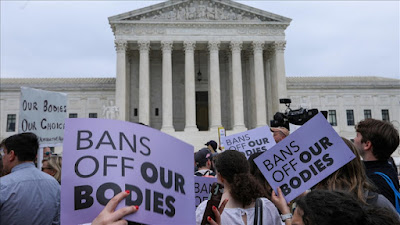 The U.S. Supreme Court took the dramatic step of overturning the landmark 1973 Roe v. Wade ruling that recognized a woman's constitutional right to an abortion and legalized it nationwide, handing a momentous victory to Republicans and religious conservatives who want to limit or ban the procedure.

The court, in a 6-3 ruling powered by its conservative majority, reinforced by Trump, upheld a Republican-backed Mississippi law that bans abortion after 15 weeks. The vote was 5-4 to overturn Roe, with Chief Justice John Roberts writing separately to say he would have upheld the Mississippi law but not taken the additional step of erasing the precedent altogether.

The Supreme Court decision to end the nationwide right to abortion has sparked speculation, including by President Biden, that other landmark rulings could now be on shakier ground, including those that legalized same-sex marriage and birth control.

"This is about a lot more than abortion," said President Biden. "What are the next things that are going to be attacked? Because this MAGA crowd is really the most extreme political organization that's existed in American history, in recent American history."

Obergefell v. Hodges legalized same-sex marriage nationwide. In Ohio, Jim Obergefell had brought suit in order to be recognized as the surviving spouse of his deceased partner, John Arthur.

The justices voted 5-4 to declare same-sex marriage a constitutional right, citing both the Due Process Clause and the Equal Protection Clause of the 14th Amendment.

"The right to marry is fundamental as a matter of history and tradition, but rights come not from ancient sources alone. They rise, too, from a better informed understanding of how constitutional imperatives define a liberty that remains urgent in our own era," wrote Kennedy, who joined the court's four liberals.

What will be next right to cut?