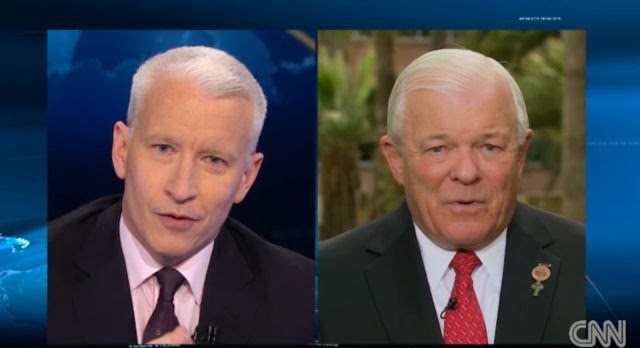 Anderson Cooper confronted Arizona State Senator and gubernatorial candidate Al Melvin about the bill that would allow businesses to discriminate against gays based on religious beliefs.

Cooper asked: "Can you give me a specific example of someone in Arizona who’s been forced to do something against their religious belief or successfully sued because of their faith?"

Melvin said he could not, arguing the bill is preemptive. Cooper asked him if, hypothetically, a Catholic loan officer could refuse to give a loan to a divorced woman. And Melvin answered: "I don’t know of anybody in Arizona who would discriminate against a fellow human being".

When Cooper pointed out that Arizona businesses oppose the bill, Melvin said it’s "because there has become a media frenzy on this". Cooper incredulously added: "You’re seriously blaming the media on this? Oh, come on!"