China's map shows how gay friendly its regions are 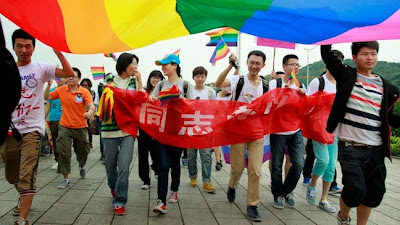 Economically developed cities and China's southeastern coastal provinces are the most gay friendly, a new survey has found.
A WeChat user conducted the poll on attitudes towards homosexuality in different Chinese provinces on the mobile messaging.
Marvel Studios on 24 April posted a heat map of the results that showed places such as Shanghai, Zhejiang, Fujian and Hong Kong were the most gay friendly in green, while northwestern and inland provinces were more conservative in red.
Border regions such as Xinjiang, Tibet and Yunnan were the least accepting, which could be due to religious beliefs or a lack of LGBT-related information. The inland province of Sichuan was the only major exception.
The survey was conducted on a mobile app and therefore limited to mobile phone users. Due to this lack of random sampling, Marvel said the map was only a reference.
In 2012, the Canton Public Opinion Research Center polled by telephone residents of Beijing, Shanghai and Guangzhou and found that 31% of respondents accepted homosexuality and 27% supported gay marriage.
In Taiwan, the most recent survey conducted by Shih Hsin University in December found that 54% of respondents supported legalizing gay marriage, still a far way ahead of the mainland. 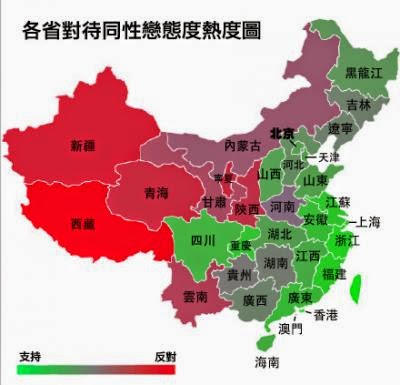