To release colorful balloons is considered gay propaganda in Russia 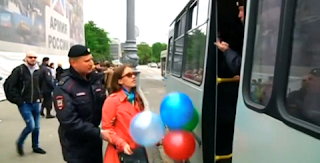 Russian police detained 17 gay rights activists in Moscow yesterday at a rally to celebrate the International Day Against Homophobia, Transphobia and Biphobia (IDAHO).

Over 50 people assembled on a square outside a Moscow theater and had planned to release colorful balloons into the air during the flashmob demonstration,  but a crowd control police drove up a bus and started shoving the protesters inside before they managed to unfurl any banners or chant any slogans or release any balloon into the air.
The LGBT activists were arrested under Russia's 2013 law banning so-called gay propaganda. The LGBT community has come under increased pressure in Russia as President Vladimir Putin has charted a more conservative course since starting his third term in 2012. After that date, most of LGBT events and demonstrations have been forbbiden in Russia. 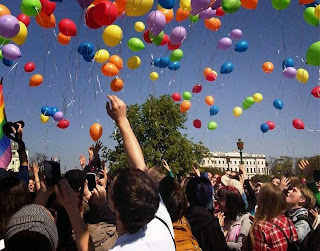 This action is considered gay propaganda in Russia