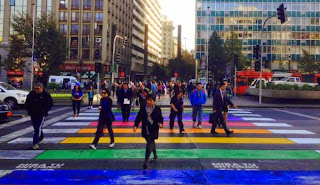 Public figures, families and activists painted a zebra crossing in the most important avenue of the capital of Chile, with the colors of the rainbow. In this action they were involved in addition to the promoters, several government officials, ambassadors, television stars and families with children who voluntarily took brush and roller coloring downtown Santiago.

Organized by the Movement for Homosexual Integration and Liberation (Movilh), citizen painted  with rainbow colors the zebra crossing considered the step busiest zebra in the country, because thousands of people from all the municipalities in the Metropolitan Region and hundreds of tourists cross this pass daily.
This initiative is part of a broad campaign conducted by the Movilh for enth commemoration in Chile of the International Day Against Homophobia.

The campaign includes the raising of rainbow flags in 10 embassies and 35 municipalities buildings, and the Equality March next Saturday, which main demand will be the Gender Identity Law.
Last  January, same-sex civil unions became into law in Chile after the Senate gave final approval to a bill passed by the House before, and President Michelle Bachelet did sign it.
Vamos Chile! 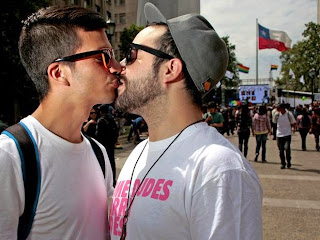 Chile is in progress