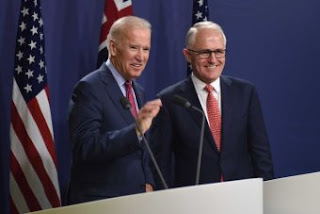 Joe Biden, U.S. Vice President, has been on a tour of Australia this week with the right-wing PM Malcolm Turnbull, who recently narrowly won reelection.

Remember that earlier this year Turnbull bowed to pressure from anti-LGBT conservatives in his party to censor a government-backed inclusive sex education programme. He has also blocked a Parliamentary vote on equal marriage to appease the rebels, opting to hold a repeatedly-delayed public vote instead.

Speaking about developments in the US, Mr Biden said: “Equality really is the watchword…. and though we sometimes stumble, we keep taking steps to extend true equality to more and more people. I’m extremely proud of the work our administration has done to advance the rights of the LGBT community in the United States, to celebrate the lives and loves of all Americans. And recently in Australia, both Victoria and New South Wales issued historic apologies for the past mistreatment of LGBT individuals under the law".

Certainly, Mr Biden is a fierce supporter of LGBT rights and equality.